Look up the road and you will see a structure that is at once perfectly circular. It has no corners or right angles that you can see and is atypical of most built things. One might imagine that anyone who lives in such a building has the most consoling view in the world. Ready to launch an attack or defeat an approaching enemy.

The Girassol is a 6 floor building on the Avenida Brito Camacho (now Av. Patrice Lumumba). It sits on an elevated section of the city on a narrow road which curves up and around the hill.

It was built in 1943 by the Portuguese architect Edmundo Sousa originally as an apartment block but relatively soon in its own history was transformed into a hotel with a spectacular view that is largely underrated for its location and price. The 6th floor was transformed into hotel inspired by the era in which the Portuguese King Joao IV reigned over the country in the 1640s.

The hotel appears to have changed hands a few times and for a period in the 1980s, during Mozambique’s darkest moments in history remained abandoned. Fortunately, the structure of the building was unharmed and it was restored back into operation.

The cover photo was taken by Harrison Forman, a travelling photographer who was once associated with the National Geographic magazine in 1961 on a visit to Lourenço Marques.

This is one of the earlier photos that can be found showing the verandahs of the apartments very typical of lusotropical architecture designed to minimize the heat and strong rays of the sun.

The aerial view looking to the east shows the location of the building on the edge of what is known as the Barreira de Maxaquene. It was taken by Lu Shih Tung, another photographer who appeared to have much of his work produced into travel-sized postcards in the middle of the 1950s.

To the far south and in the horizon is the industrial city of Matola and closer towards the left is the Port of Lourenço Marques. The cranes are used for lifting containers and other heavy items off the ships that arrive into the Baia de Lourenco 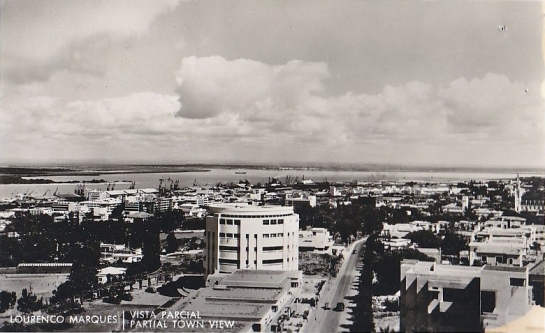