The Khovolar is a residential facility by Pancho Guedes in the city of Lourenco Marques. The initial concept was drawn up in 1966, commissioned by what was then the Swiss Mission in Mozambique who had a long history of promoting primary education. The site is adjacent to the large complex also belonging to the Mission of Av. Pinheiro Chagas (Mondlane).

It is said that the Mission envisioned the facility to provide accommodation for students who would be attending secondary or tertiary education. In those years educational facilities in the capital were more developed than in other provinces of the country, obliging students to travel to Lourenco Marques to further their education. As a result, the facility was inclined to accepts students from other provinces and from the interior of the country.

The building is implanted on a rectangular plot of 55 x 40 metres accessible from a small road perpendicular to Av. Pinheiro Chagas. It is a four storey building, above the level of the road and a basement which extends much further to the rear of the building which is used as a recreational space and for WC facilities. The site is on a declining slope in the north-south direction. 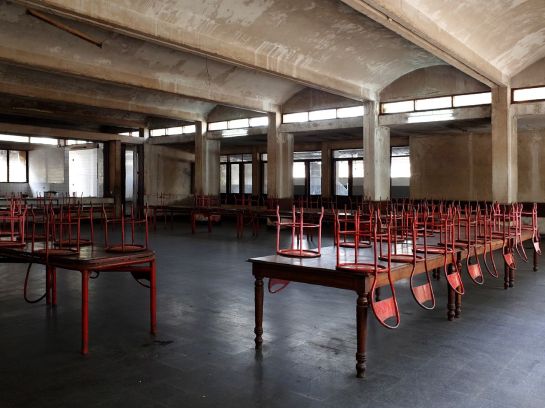 Also distinct is the separation of the building into two symmetrical volumes one for males and the other for females. Both of these appear to have their installations including discreetly mounted water reservoirs on the terraces. The entrances are also separated at the front of the building with their own stairwells and are not only sunk, but some distance from the main road ensuring a reduction in ambient noise and the illumination of the basement with its large gathering area. The top-most floor has provisions for a laundry which without any doubt would be fundamental to the nature of this building. Other buildings, including the chapel of the Swiss Mission with its tiled roof can be seen immediately to the rear of the Khovolar.

The facade of the building is in a westerly direction indicating high exposure to the heat and light of the sun for most of the day. To maintain the livability, the rooms on the floors (which face the road) are protected by verandahs. There are both large and small verandahs with the larger ones further protected by Venetian blinds that almost completely obscure the floors when closed. The smaller verandahs are the intermediate landings which not only allow for a constant flow of breeze in the stairwalls but also a place for the users to rest as they make their way up.

Views from the rear of the building show a reversal of the situation. The verandah which are now in an easterly direction are recessed but are not covered by the same Venetian blinds as in the front. The design of the verandahs of the intermediate landings is replicated to permit for cross-current breezes. Extensive use of brise-soleils and beams increaes shelter to the occupants. 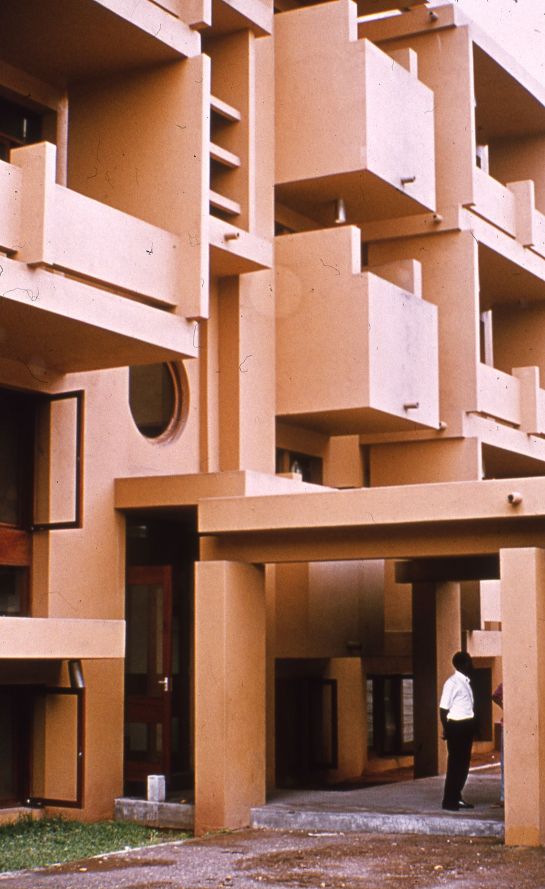 Guedes was a prolific designer who created his own sculptures, paintings and as shown, a custom typeset for the Khovolar which is used for the lettering on the front – “Khovolar masculino” to denote the building and its two wings.

The modernist movement saw innovative revisions of the Christian cross which is a representation of the crucifixion of Jesus Christ. Guedes integrated a cross into the monogram of the Khovolar. This cross may have been modeled after the Swiss cross most likely due to the project belonging to the Swiss Mission. The logo has also been molded into a three-dimensional concrete pillar.