In the bairro of Sommerschield is the Church of Santo António, also known as the Igreja de Polana (even though it is really in Sommerschield). The streets of this part of town are unlike those elsewhere in that they are not the wide tree-covered walkways known as the avenidas. The wealthy residents of this community who most likely had graduated to motor vehicles at the time enjoyed much larger plots of land. The homes built here from the 1950s onward are modern with a wide footprint leaving little space on the street for pedestrians.

It may be for that reason that one would not easily notice the Church of Santo António which is flanked by generous multi-storey homes with their tall perimeter walls. One has to drive to the very end of the block to behold all its glory. It was Nuno Craveiro Lopes, the son of a former president of the Portuguese republic, who designed the church. The project is a reflection of the modernist tendencies in architecture that were gaining momentum around the world in the middle of the 20th century. It is said to be associated in its likeness with modern Brazilian architecture of the era developed by Oscar Niemeyer. 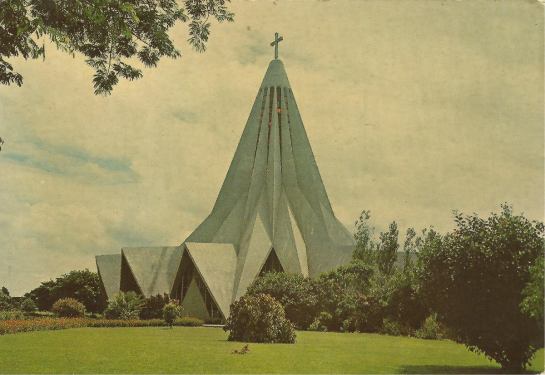 It is a bold, heavy and marvelous structure of reinforced concrete in the shape of an inverted flower with light flowing from the top and sides through stained glass. It has a capacity for 600 people seated, 7 altars and 16 spaces which allow for light to enter. Some of the glass panels have been designed to open allowing for ventilation.

Craveiro Lopes appears to have had a falling out with the members of the congregation when they requested certain changes to both the interior and exterior. Initially, the alter had been conceived to be at the center of the building, illuminated by the stained windows on the spire, with congregation seated around it.

Due to the conflicts, the architect broke his relations with the religious community after construction which he felt was a serious and negative adulteration of his work.

A close-up view of the exterior shows the sharp, angular characteristics of the pyramidal concrete structure. The stained windows extending from the top of the spire produce a red-orange glow on a sunny day, highly in contrast with the cold and sombre interior.

Aerial images of the church and the surrounding blocks provide some guidance of its scale. It was said that the project was initially to be built some 500 metres to the south near Parque Jose Cabral, ultimately being located in bairro of Sommerscheld. At the time of construction, the area was sparsely populated, with the bairro having begun its life only a decade earlier.

The church is some distance away from the road and not immediately noticeable due to the overgrowth of vegetation, not yet visible in this early image. Driving from the south you would follow either Av. Dr Egas Moniz or Rua de Nevala (Av. Nkruma). 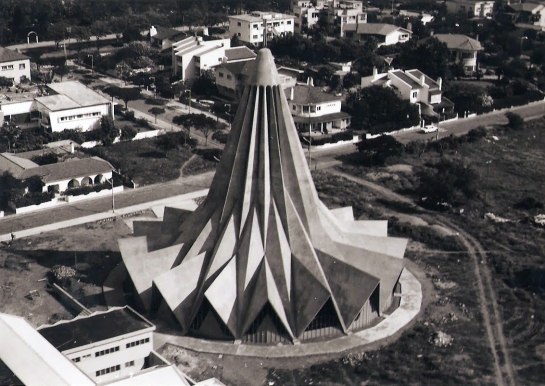 From the neighbouring bairro of Polana, the church is seen in the distance. The vantage point appears to the be the sprawling campus of the Hospital Miguel Bombarda and the Faculty of Medicine of the Universidade de Lourenço Marques. Even further into the distance one can see the Bucellato building, likely owned by Bucellato & Sons, a wealthy immigrant family from Italy. 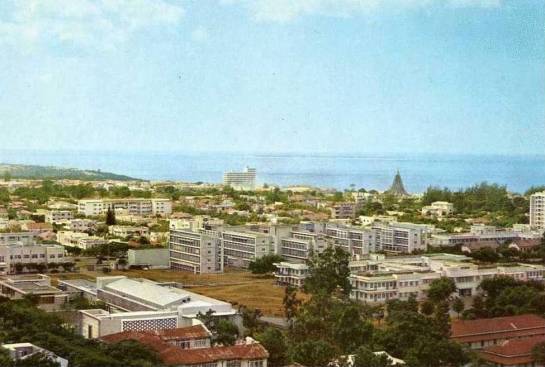 Sadly, Craveiro Lopes (left in photo) died in 1972 at the relatively young age of 51 of an undisclosed illness. He did not live to see the independence of Mozambique from Portugal although he would have followed the Liberation War in the 1960s.

While his work in Mozambique was limited to only a handful of projects, he was quite visionary in his approach and rejected the powerful directives of the Salazar regime in Portugal which tried to control the colonies such as Mozambique and Angola in more ways than it needed to.

Loving these inner city roads
There’s a little place just down the hill, off the road they used to call Duques de Connaught and Av. Marginal. Go by too quickly and you might miss it. This is the view from the Caracol and below is the Club Naval
Got a phone full of numbers
A stunning view at the corner of the ex-Av de República in the mid 1960s. On the left is the Brazilian Cultural Centre, the Banco Nacional and still under construction Hotel Turismo.
The Anglican Church of São Cipriano in the bairro of Chamanculo, designed by Pancho Guedes and inaugurated 1974.
Home 🏠